On January 13, with the theme of “Leading in China, aiming for the world”, the HAVAL Global 5-million-sales Celebration Ceremony and Global Strategic Conference was held at the HAVAL R&D Centre in Baoding. HAVAL owners, Chinese and foreign experts, partners and over 500 media from all over the world gathered to share HAVAL’s success and joy at the company reaching the Global 5-million-sales cumulative sales mark and witness the release of the “521” Globalization Strategic Blueprint of the SUV powerhouse, a map of the future plans to increase the brands global footprint. 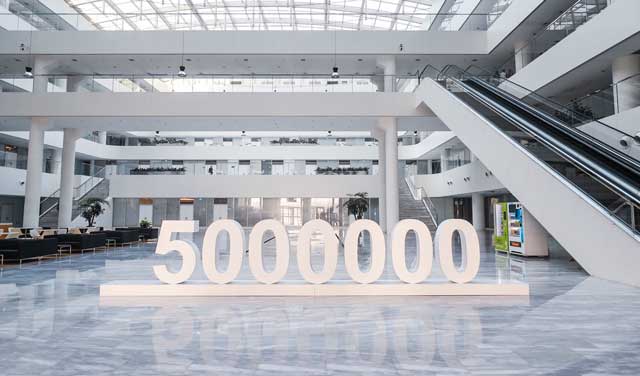 By the end of 2018 the accumulated global sales of HAVAL SUV exceeded 5 million units, and in doing so HAVAL became the first professional SUV brand in China to enter the 5 Million Club. For nine years in a row HAVAL SUV have topped the rankings of SUVs sold in China. As the best seller of the HAVAL brand, the HAVAL H6 has created a new legacy as the sales champion for a total of 67 consecutive months in the SUV market. It is worth mentioning that the sales volume of the newly launched F5 and F7 models of the F-series have exceeded 10,000 in December 2018 alone, becoming a force to be reckoned with in the HAVAL range for breaking sales records.

As the founder of the HAVAL brand, Wei Jianjun has always had his focus on the future. During the event, Jiianjun made a speech with the theme of “Global Dream·China Heart”. He said that the globalization of Chinese brands is an inevitable trend. In future development, HAVAL must aspire to become truly global by creating products with global competitiveness, by building a globally influential brand and to become the global SUV leader. At the ceremony, Wei Jianjun officially released the HAVAL “521” Globalization Strategy, which simply put, is to realize the annual sales volume of 2 million vehicles within 5 years and to become the global No.1 professional SUV brand. The release of this strategy indicates HAVAL’s clear intentions to become the global No.1 SUV brand in the near future. The speech was met with a standing ovation from everyone present. 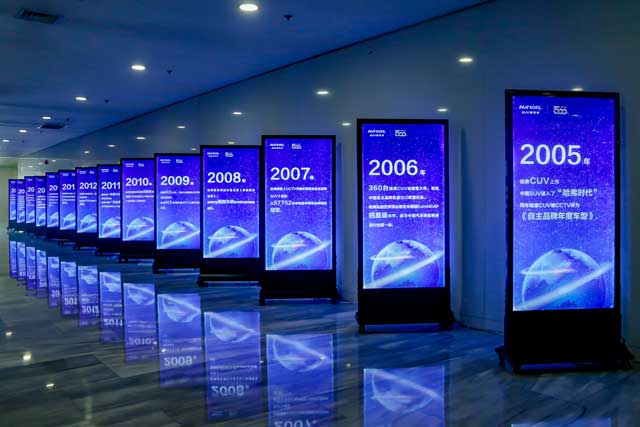 Wei Jianjun also alluded to the creation of a blueprint for HAVAL’s future technology research and development, intelligent network, and alternative energy development.

At present, HAVAL has established eight R&D centers around the world, including smart drive, intelligent network, alternative energy and modeling. The continuous improvement of the global R&D layout provides leading technical support for HAVAL to create products with global competitiveness. At the same time, it has also established a new technology incubation laboratory in Silicon Valley to carry out research and development of cutting-edge technologies in cooperation with international technology giants. In the next five years, the total investment in global R&D by HAVAL will exceed 5 billion US Dollars, which will continuously consolidate the technical strength and deepen the R&D of leading technologies within the brand.

In terms of the R&D of intelligent network, HAVAL will build a full-scenario intelligent service system with a trinity of basic technology, user thinking and personalized service, and build a 5G global intelligent connectivity ecosystem in cooperation with the “Internet of Everything” platform, so as to meet the needs of users in 24 global language regions.

In terms of the R&D of alternative energy, HAVAL has invested billions of Dollars to be at the forefront of this global motor industry phenomenon. With the advent of their second generation series and parallel hybrid technology, HAVAL has created the very highest level of quality SUV products in the world. Their technological innovation in the field of FCEV (fuel cell energy vehicle) enables HAVAL to stay ahead of the times in terms of the R&D of hydrogen power, and HAVAL can thus create the world’s leading hydrogen-powered SUV products. In the future, HAVAL will comprehensively explore package solutions such as plug-in hybrid and hydrogen power to create high-quality SUVs that meet the diversified demands of global consumers. 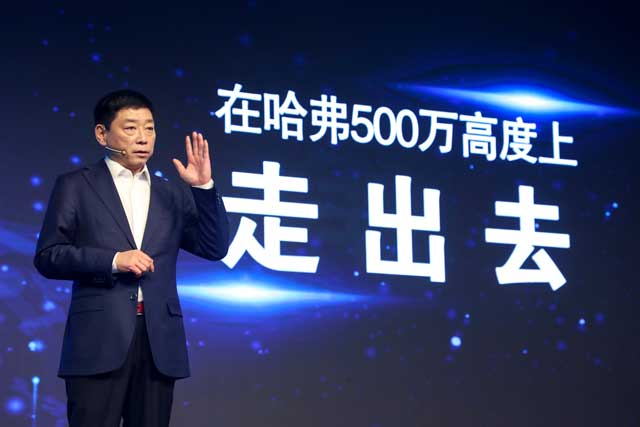 By 2023, HAVAL plans to launch 20 global products containing leading technologies of the four new modernization technologies mentioned above and the ratio of new energy models will exceed 60% versus traditional propulsion. At the same time the HAVAL H6 and F7, as the flagship models of the HAVAL range will aim to be among the world’s top 10 SUVs. Among the new energy models, HAVAL Series-Parallel High-pressure HEV products will be in mass production by 2021. In 2022, the HAVAL hydrogen-powered SUV will make its debut at the Beijing Winter Olympics to show China’s commitment to alternative propulsion and its brand strength to the world.

On behalf of HAVAL, Wei Jianjun also announced the initiative that has been launched to establish a global alliance of Chinese auto enterprises. HAVAL is willing to share innovative global technologies with Chinese self-owned brands, carrying out in-depth cooperation in all fields such as alternative energy, intelligent drive and intelligent network and promote the globalization of Chinese automobiles so that China could transform its automobile landscape from a major auto importer to a major auto exporter. 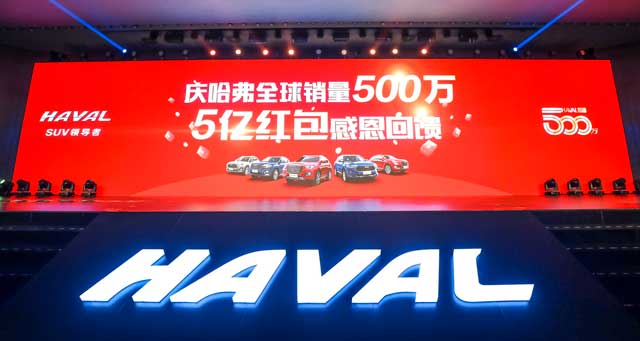 Reaching the 5-million-sales mark is a glory moment for HAVAL, indicating HAVAL’s leading position in the Chinese SUV market. Wang Fengying, President of Great Wall Motors, gave a brilliant interpretation of the “Leading in China” spirit of HAVAL. She said that HAVAL is professional because of its focus and HAVAL has become a specialization SUV brand in the eyes of consumers. HAVAL is an expert because of its dedication and HAVAL has become a leading SUV brand in China. HAVAL is not only the No.1 brand of SUV in China from a sales point of view, but also the No.1 brand in terms of service and integrity within the domestic market.

With the brand concept of “Focus, Dedication, Specialization”, HAVAL has been adhering to the corporate strategy of “creating high-quality products supported by high-tech equipment within a high-performance design”, insisting on focus, concentrating superior resources to create high-quality SUVs and form a portfolio of products covering large, medium and small varieties as well as various levels of specifications. Today, HAVAL has comprehensively covered various segments with the H&F dual- series layout.

When summarizing that the milestone of the 5-million-sales of HAVAL was largely dependent on its focused strategy, Wang Fengying said that concentration is a kind of spirit and a kind of awe for the industry. Focus is to remain steadfast, to resist distraction and to pursue your goals with a relentless discipline. Great Wall has always been an auto manufacturer with the commitment of making the best automobiles in China wholeheartedly. It is the persistence and focus of HAVAL over the past decades that have contributed to the success of the HAVAL brand.

She also said that HAVAL has always persisted in integrity. HAVAL cannot only create quality automobiles, but must be focused on the creation of services that consumers can trust. Since 2011, HAVAL has built an integrity system with the sales and service providers through ongoing HAVAL DELIGHT loyalty program, an incentive system with the goal of pursuing customer satisfaction, and the company has implemented it vigorously to provide users with high satisfaction levels of service. At the same time, HAVAL has also carried out continuous service campaigns, so that customers can enjoy excellent after-sales service, and through doing so HAVAL have won the trust of 5 million users. HAVAL integrity is a long-term and global commitment and is the cornerstone of brand trust and customer loyalty.

On the evening of the event, the industry experts and economic experts present spoke highly of HAVAL’s 5-million-sales achievement. Dong Yang, Vice President of China Association of Automobile Manufacturers, said that HAVAL’s 5-million-sales landmark stands testimony to its unique manufacturing system, procurement system and service system. It has created a development model with Chinese characteristics. As an outstanding representative of Chinese brands, HAVAL has a promising future. Fan Gang, a famous economist, made a profound analysis on the situation of world economic development and spoke highly of HAVAL’s globalization strategy and commented that HAVAL’s next 5-million-sales will be realized at a faster speed.

The 5-million-sales come from the trust of 5 million car owners worldwide. Present at the event, Aleksandr Zholobov, a car owner from Russia, shared the experience of driving a HAVAL H9 across 14 countries in Asia and Europe and presented the travel-inspired artwork drawn by his son to HAVAL to express his trust and support.

HAVAL and Partners work together for a win-win future

HAVAL’s aim is to gain customers with its quality products through partnerships with the very best suppliers, this collaborative approach is key to ensuring the highest levels of quality of the product offering. For 13 years, HAVAL has cooperated with the world’s leading suppliers, mastering the core component resources through strategic cooperation with internationally renowned brand suppliers and mastering the core technologies of automobiles through vertical integration. It has realized the self-production of engine, transmission, chassis, electric appliance, internal and external accessory, mold and other products, formed a unique supporting resource advantage and built a stable, professional and efficient industrial chain. In the future, HAVAL will continue to create the most stringent quality system and provide users with consistently superior products.

At the same time, on the basis of the current network of more than 800 distributors, HAVAL will build an ecological and standardized sales and service structure with five forms of “intelligent experience store +4S store + urban exhibition hall + community window store + maintenance center”, which will cover pre-sales, sales and after-sales and provide consumers with all-round exclusive services.

The world is so big and for the most part, unchartered territory for us, outward expansion is the obvious route to globalization of the brand. The 5-million-sales milestone is not the end point, but rather another starting point. Globalization is the “focus” of HAVAL for the future. Standing on the new starting line, HAVAL’s focus is transformed from dominance in China to dominance of the world. With advanced technology and excellent quality, HAVAL will stand on the turning point of the new era of industrial revolution and the outpost of the competitive trade with higher aspirations, broader vision, more open mindedness and more innovation, departing on a journey to achieve the pinnacle of Chinese brands. As the global leader of Chinese SUV, HAVAL will continue to fight and aim for the world!